KD8TWG does a good job here:

Illustrating what is happening. 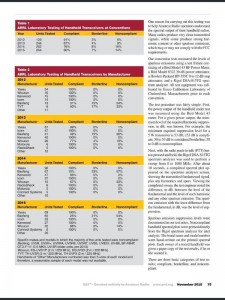 QST magazine just published an article where they tested radios at ham conventions to see how well the radios met the compliance specifications set forth by the FCC.

The results: the cheap Chinese radios such as Baofeng, TYT, and Wouxun, all performed miserably, with sometimes half not meeting FCC standards.   But what does that actually mean?

Typically, the radios transmit “spurious emissions” which means they are emitting RF signal on frequencies outside where they are supposed to be transmitting.   That could show up as a wider bandwidth signal, such as a 25kHz signal actually taking up 35kHz or 40kHz, or it could manifest as harmonics and hash on other frequencies.

This has two effects.   First, because the transmitter is emitting on frequencies we are not expecting, we could be interfering  with other legitimate transmissions. (That is why the FCC has limits on spurious emissions in the first place)
Second, those inefficiencies are wasting RF power on signal that reduce the efficiency of our transmission.  If your radio is outputting two watts of power, but has lots of spurious emissions, only 1-1/2 watts may be on your actual frequency.

What does all this mean for the end user?
First, without specifically testing your particular radio, we don’t know if it meets specs or not.   If, however you are using a cheep Chinese radio, the chances approach fifty percent that your radio doesn’t meet spec.
If your radio is out of spec, it will still work.   When you transmit on a frequency, someone on the same frequency, and in range will still be able to hear you, and transmit back to you.   Everything will seem to be working.   You just will not get quite the range on your radio that someone with a more efficient radio will get, given everything else the same.   Does that matter?  It may, or may not.   It would most notable at the fringe of your range.

The other downside is that the spurious emissions may interfere with other radio users.   If you have a large group, adjacent channels may be interfered with by wider than spec bandwidth transmissions.   Depending on the frequencies involved, it may also interfere with other unrelated radio users, (which also increases your chance of being detected.)

Finally, if the interference is frequent or severe enough, it may result in the FCC getting involved, notices, and possibly even forfeiture of equipment. (Very rare, but still exists within the realm of possibility.)

The gun analogy:   A cheap Chinese radio will transmit radio waves just like a cheap, poorly put together rifle can shoot out bullets.   If all you need is to send bullets downrange, regardless of accuracy, then any rifle will do.   Likewise, if all you need to do is transmit some RF, any radio will do.   If you need better than 20MOA accuracy however, you might need a little better quality gun, and if you need better RF performance, you might want a better quality radio.  Sometimes you do get what you pay for, or in some cases, you don’t get what you don’t pay for.